A land rich in historythe origins

In Roman times the Versilia was known as Fosse Papiriane and was a large swamp between Pisa and Massa, and between the sea and the Apuan Alps. He was touched dalla Via Emilia Scauri, and crossed by the Via Aurelia.
During the medieval era through the inside, along the South-East North-West, by Via Francigena.

The so-called "Historical Versilia" consists exclusively of four common places: Pietrasanta, Forte dei Marmi, Seravezza and Stazzema. The latter two, because the land is located mainly on hills and mountains of the Apuan Alps, are the so-called "Alta Versilia” or Upper Versilia. From the geographical point of view the "Historical Versilia" extending from the north Cinquale valley to the south Motrone valley, and coincides with what was the Capitanato di Pietrasanta.

A major literary figure who attended the Versilia at the beginning of the 20th century was Gabriele D'Annunzio, who had built a huge villa in the pine forest around Pietrasanta. The poet spent there the last years of his life, composing the most famous verses of Alcyone and "Francesca da Rimini" (read on Wikipedia)


Pietrasanta is a town and comune on the coast of northern Tuscany in Italy, in the province of Lucca. Pietrasanta is part of Versilia, on the last foothills of the Apuan Alps, about 32 km north of Pisa. The town is located 3 km off the coast (where the frazione of Marina di Pietrasanta is located).

The Pietrasanta Marina, with golden sand and luxurious equipments is considered one of the best beaches of Italy.

The town has Roman origins and part of the Roman wall still exists.
The medieval town was founded in 1255 upon the preexisting "Rocca di Sala" fortress of the Lombards by Luca Guiscardo da Pietrasanta, from whom it got its name. Pietrasanta was at its height a part of the Republic of Genoa (1316–1328). The town is first mentioned in 1331 in records of Genoa, when it became a part of the Lucca along with the river port of Motrone, and was held until 1430. At that time it passed back to Genoa until 1484, when it was annexed to the Medici held seigniory of Florence... (read on Wikipedia)

Download the map of Marina di Pietrasanta and Centro Storico 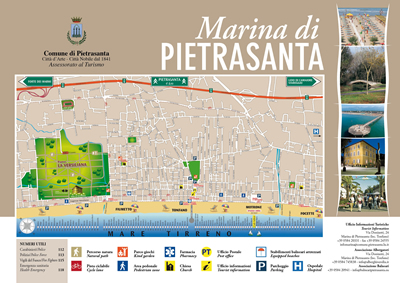 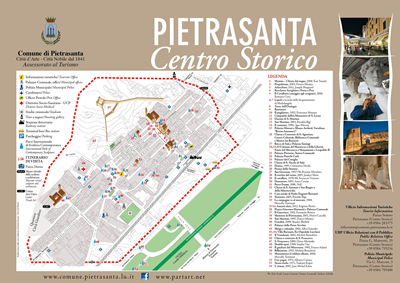 Enoteca - Restaurant - Sell Wine in the historic center of Pietrasanta, in Versilia

Enoteca Marcucci offers its customers a wide range of gourmet products professionally tested and selected by us. High quality products to which was affixed our custom label.

The cellar of the Enoteca Marcucci boasts countless bottles of prized wines to accompany our cuisine. By now, our list includes over 3000 brands of the most renowned wines coming from Italy, France and many other countries. The range of the possible combinations with our dishes is unlimited. visit the official site

(Wikipedia) La Bussola (Bussola Versilia dal 2007) is a nightclub on the seafront of Marina di Pietrasanta, near the town of Le Focette, founded by Sergio Bernardini in 1955. Along with La Capannina di Franceschi, one of the most popular of Versilia since the sixties.